Skip to content
Previous Next
Meet our youngest supporter

Today we met six year-old Zac Swift, our youngest donor so far! He visited the HealthBus with his older brother, Finn (aged nine), and his mum to hand over £100 to Dr Maggie Kirk and the team. 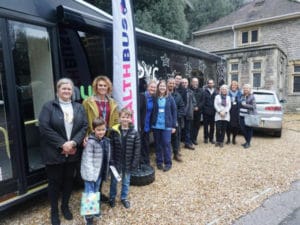 Zac Swift and his brother Finn with the HealthBus team

Zac raised the money by doing jobs around the house and selling old toys over the year. He’d decided to support a homeless charity after seeing rough sleepers in the Bournemouth Winter Gardens and wanted to help them.

“How many people have you helped?” was Zac’s first question for Dr Kirk. She explained that over 200 people a year visit the HealthBus, often many times, before becoming more settled in accommodation. For some, it’s the first time they’ve seen a doctor in many years because it’s difficult to access mainstream GP services whilst living on the streets.

Staff working with the HealthBus team include nurses, drug and alcohol and mental health workers, and an optometrist, as well as GPs. Dr Kirk told Zac how they can treat cuts, wounds and chest infections before they become really serious and need emergency hospital treatment. The HealthBus can also provide glasses and get broken ones repaired.

Dr Kirk explained that a drop-in service is especially helpful for rough sleepers because phones get lost or wet and can run out of charge, making it impossible to set up appointments.

Zac also wanted to know how his donation would be spent. Dr Kirk told him that we rely on donations to cover the running costs of £60,000 a year and that she would like the NHS to fund the service.

To thank Zac for his donation, Dr Kirk gave him a toy bus. Both Zac and his brother Finn plan to continue raising money for charity each year.

We’re very grateful to Zac for his amazing generosity and we’re very impressed with his ability to raise funds for those in need at such a young age. We hope he enjoyed his visit as much as we did and we wish him all the best for the future. 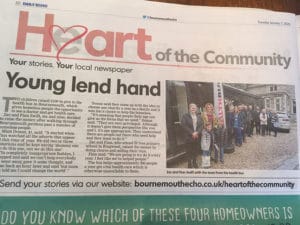 Zac’s donation was covered by the Bournemouth Echo

Read about Zac’s visit on the Bournemouth Echo website

This website uses cookies to improve your experience while you navigate through the website. Out of these cookies, the cookies that are categorized as necessary are stored on your browser as they are essential for the working of basic functionalities of the website. We also use third-party cookies that help us analyze and understand how you use this website. These cookies will be stored in your browser only with your consent. You also have the option to opt-out of these cookies. But opting out of some of these cookies may have an effect on your browsing experience.
Necessary Always Enabled
Necessary cookies are absolutely essential for the website to function properly. This category only includes cookies that ensures basic functionalities and security features of the website. These cookies do not store any personal information.
Non-necessary
Any cookies that may not be particularly necessary for the website to function and is used specifically to collect user personal data via analytics, ads, other embedded contents are termed as non-necessary cookies. It is mandatory to procure user consent prior to running these cookies on your website.
SAVE & ACCEPT
Go to Top